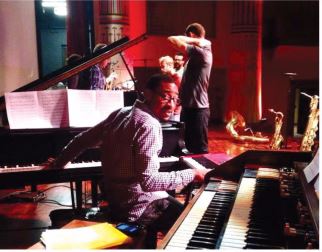 Making Straight Ahead Fun for All

Akron has a rich history in jazz and blues. And for the past two summers, its hep-cat heritage has been celebrated at the Rubber City Jazz & Blues Festival, a multi-day homage to that hippest of American art forms.

The festival grew out of a backyard conversation in 2014 between jazz pianist Theron Brown and musician Dan Wilson. They were discussing the Knight Arts Challenge, the contest put on by the Knight Foundation to inspire and uncover the region’s best arts ideas. Brown noted that Pittsburgh and Detroit have well-known jazz festivals, so it stood to reason that Akron—with its deep roots in the genre—should have its own.

“The light went on,” says Brown.

Akron was known as the jazz corridor of the Midwest in the 1930s and ’40s when it was a hub for musicians traveling between Chicago and New York. Howard Street was jamming with clubs that attracted musicians such as Ella Fitzgerald, Cab Calloway and Louis Armstrong. In the 1960s and ’70s, pianist native sons Pat Pace and bandleader Roland Paolucci carried the flame.

The scene today is seeing an extraordinarily rich revival among millennials who grew up with swipe-button access to all sorts of music. The LockBottom and BLU Jazz+ nightclubs are packed on weekends. The University of Akron, from which Brown graduated, has a thriving jazz music program built on its storied history.

Vogue magazine, in an article titled “6 Reasons Akron, Ohio, Should Be on Your Radar,” cited the city’s hot blues and jazz scene as a reason to visit.

Once the festival got the green light from the Knight Foundation in 2015, Brown got to work raising matching funds required by the $75,000 grant and planning the inaugural festival. The 2016 event was two days of concerts at four venues. The 2017 event was expanded to four days, 10 venues, a kickoff parade, a lecture and a documentary on the legendary Bill Evans at the indie Nightlight Cinema.

“We want to keep this legacy alive,” says Brown. “We need to nurture young talent.”

Organizers also hope to draw more performers from across the country and the globe, reviving the Rubber City’s role as a jazz alley for the genre’s best artists.

can i buy viagra in china

cost of cialis at walmart

proper use of viagra

proper use of viagra