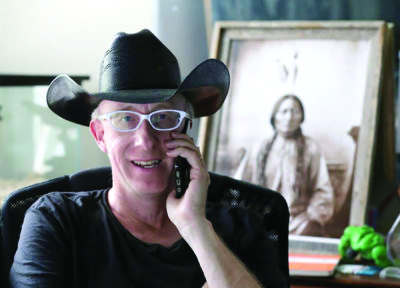 Helping the Homeless: One Man. One Accidental Vision.

To say The Homeless Charity, started by Sage Lewis, Akron realtor and owner of Rubber City Auctions, was created by chance may be an understatement. Lewis never knew he would create a village for the homeless in the back of his warehouse in Akron’s Middlebury neighborhood. But in the cold Ohio winter of early 2017, he realized there was a crucial need to get homeless people off the streets, and he knew he had the space to shelter them. Lewis has built what has now become a village for interim housing.

He turned the space in the backyard of his 15 Broad Street building into a tent village for the homeless where they could live and thrive—with tents, bathrooms, laundry facilities, a computer lab, The Second Chance Store and a community garden. “I did not (initially) have the idea,” Lewis admits. “The only thing I really did was not say ‘no.’ We’re organically driven, with little-to-no strategy,” Lewis says.

Lewis reports the village now houses 15 tents and 25 families and is a completely self-run, self-directed democratic community. Three of the homeless men who moved there were elected by the other residents to take on the roles of running the village. For instance, Paul Hayes, who was living on the streets of Akron for seven years due to extreme alcoholism, is the Operations Director. Hayes oversees the security and maintenance of the organization, and monitors the area wearing a shirt bearing the letters  “SECURITY.” No alcohol or drugs are allowed on the property. He also coordinates the volunteers and oversees The Second Chance Store, where all the profits go back to the community.

The nonprofit is only a temporary facility to get people back on their feet and into permanent housing, Lewis stresses. “I don’t know if I’m the long-term home guy. I am just a stepping stone. I am the guy you come to (if you are) the poorest of the poor . . . ” he says.

When asked if the city’s zoning laws accept this concept, Lewis simply says, “It’s not legal but not illegal. We’re riding in a gray area. There are no zoning books to deal with us . . . I get it. I’m not upset with that.”

Lewis and his elected directors are planning for their first full winter of 2017-18. They are not allowed to have outside electricity, but are considering other ideas such as insulation and emergency blankets.

“I try not to get ahead of myself,” Lewis says. “I’m a ready-set-fire type of guy.” The strategy that has so far worked is getting families off the streets and into a transitional home.—CS

Sage Lewis saw a need and met it by establishing the The Homeless Charity.

who has tylenol on sale

who has tylenol on sale

is there a generic for cialis

cialis side effects in men

can i buy cialis in mexico

cialis over the counter canada

viagra instructions for use

how much should viagra cost

Brand viagra over the net