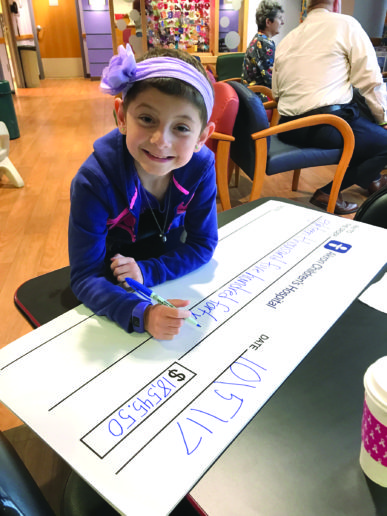 Sending Bags of Love and
Running the Race to Fight Cancer

You wouldn’t expect a 6-year-old child who is lying in a hospital bed fighting cancer to be thinking about anything more than missing her friends, losing her hair and her own health prognosis. But then you don’t know Kylie Jacobs, who has fought cancer twice and has spent the majority of the last three years at Akron Children’s Hospital.

Lying in that hospital bed after her first diagnosis, Kylie thought about the kids around her who needed to be occupied by more than sad thoughts about their health. “I thought of myself getting gifts, and thought of others being lonely and wanted to give them something to do,” Kylie says.

So in between cancer treatments, Kylie came up with the idea for Kylie’s Bags of Love: handmade bags filled with age-appropriate toys and crafts.

“After beating cancer the first time, she asked for a sewing machine to make bags for kids, and one thing led to another,” says Eric Jacobs, Kylie’s father. “We started the project, and two months later she was diagnosed again (with cancer) in February 2016.”

That didn’t stop the project. She and her parents solicited the help of neighbors, friends and relatives to sew the bags and donate items like colored pencils, art supplies and Beany Babies geared toward 6 to 9-year-old children. As of 2017, they have sewn, filled and donated 700 bags for both Akron Children’s Hospital and Cincinnati Children’s Hospital.

The Jacobs family also founded Kylie Rose’s Run, held at Copley High School once a year in August, to raise money for Akron Children’s Hospital Oncology Division. Funds are raised through registrations, donations and sponsorships. The run is in its third year, and has raised $50,000 for the hospital through the 800 runners who participate annually.

“It was Kylie’s idea,” Eric Jacobs says. “She speaks at the beginning of the run, and people are inspired by her.”

Kylie is now a cancer-free, healthy 8-year-old in third grade at Copley Public Schools. She and her parents have since expanded the Bags of Love idea to include bags with teen-oriented supplies, and have received donations from Copley Police and Fire divisions, while still relying on the much-needed help and donations from their friends and family members.

“ I will keep doing it, as long as everyone at the hospital loves them,” Kylie says.—CS

alternative to viagra and cialis

alternative to viagra and cialis