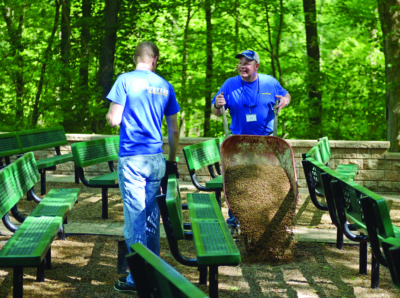 More than 75 percent of millennials prefer to donate their skills instead of money, according to a 2015 Gallup survey. They’re a hands-on generation that wants to give back to their communities in tangible ways, the researchers say.

The Goodyear Tire & Rubber Company is on top of this trend, although they didn’t set out to be. In June 2017, the tire maker launched its inaugural Week of Volunteering. More than 1,200 Goodyear employees, retirees and their loved ones took part in 69 projects in Akron as well as in other countries where the tire company operates, including Brazil, China, Indonesia, Romania and Ukraine. All generations, not just millennials, were invited to volunteer, and they did.

The company said volunteers donated the equivalent of nearly $300,000 worth of time. The majority of activities occurred in Akron where volunteers spent more than 5,000 hours with 12 nonprofit organizations.

And Goodyear’s brainpower was in high demand. Volunteers held professional development classes for the nonprofits, sharing tried-and-true business tools that can be transferred to the philanthropic world. More than 200 people participated in the workshops.

The point of the week was to make it easy for anyone to volunteer. Goodyear, like most companies, has a core group of people who consistently volunteer at nonprofits. But the idea of the week was to engage those who’ve thought about volunteering but never acted on the impulse, says Alison White, director of community engagement at Goodyear.

One man who volunteered for the first time with the Downtown Akron Partnership made a point of telling White that his experience beautifying downtown was deeply rewarding. He said he planned on continuing to volunteer with the organization.

“He was hooked,” she says. “That’s exactly what we wanted to see.”

Goodyear began planning the week by studying the best practices of other companies and determining which ones could work with Goodyear’s culture and organization. The company knew that its size and global reach harnessed significant power.

“We have all these exceptionally intelligent and creative people at Goodyear—engineers and others. We just had to figure out the best way they could help our communities,” says White. The company’s size also posed particular challenges. They decided on a week of volunteering, as opposed to a single day, to allow the thousands of employees to find times that worked for them without losing the impact of a short-term effort.

The team sought out nonprofits with which they had an existing relationship, asked what was needed and determined whether Goodyear employees could provide it. When they had decided on the nonprofit beneficiaries as well as the week timetable, they gave employees a menu of choices. They used a program called Sign Up Genius that helped to simplify the organization of times and places, White says.

The week was a true success according to White. They weren’t sure how the workshops would be greeted, but all 200-plus slots were rapidly filled. They were able to complete ambitious projects in seven days because so many people signed up to volunteer and brought their loved ones along. It has inspired the company to consider doing the same kind of volunteer effort next year.

The team is studying the outcomes of the week—what worked well and what could be improved—and is developing their plans for next year accordingly. They’re hoping the week will help other companies develop similar programs.

“There’s nothing wrong with writing a check (to an organization),” says Keith Price, a spokesman for Goodyear. “But this kind of program has long-lasting effects for the organizations and for our associates.”—ME

Goodyear employees landscape a seating area at Camp Y-Noah in Clinton Township during the company’s Week of Volunteering.

over the counter cialis

over the counter cialis