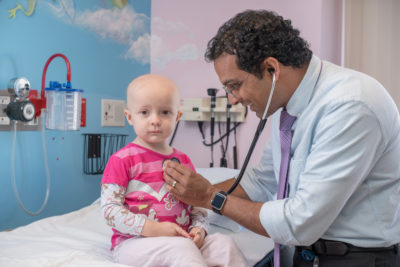 The Wind Beneath Their Wings

In the three decades that Giant Eagle has operated stores in Northeast Ohio, it has lent its support to Akron Children’s Hospital.  From leading market-wide fundraisers to providing birthday cakes to hospitalized patients, the Pittsburgh-based retailer has helped make a difference in the lives of ill children.

Over the past seven years, Giant Eagle customers have given more than $620,000 for the Showers Family Center for Childhood Cancer and Blood Disorders during the chain’s register campaigns. Each year, the campaign grows in popularity, netting $143,000 in 2017 alone, according to hospital officials.

“Many of the services we provide for patients and families in the Showers Center are made possible entirely through philanthropic support from donors and companies like Giant Eagle,” said Machelle Syx, corporate alliance coordinator at Akron Children’s Hospital. For instance, donations make it possible for the hospital to bring in teachers to help kids stay current with their classwork, she reports.

“It’s very important to us to give back to the communities where we do business,” said Jannah Jablonowski, spokeswoman for Giant Eagle. “We’ve done that throughout our 86-year history simply because it’s the right thing to do.”

Giant Eagle customers who shop with small children are likely familiar with another of the chain’s campaigns on behalf of the hospital: The Little Shopper Treat Card. For $1, parents or grandparents can purchase a treat card for each of their children. In return, each child receives a free treat every time they visit the store with an adult during the year. The array of available treats includes a piece of fruit from a produce display, a slice of cheese from the deli or a cookie from the bakery.

Totaling more than $2 million during the program’s longstanding history, all proceeds are donated to local children’s hospitals in communities served by Giant Eagle stores.—ME

A young patient is treated at the Showers Family Center for Childhood Cancer and Blood Disorders at Akron Children’s Hospital thanks, in part, to support by Giant Eagle.

over the counter erectile dysfunction pills