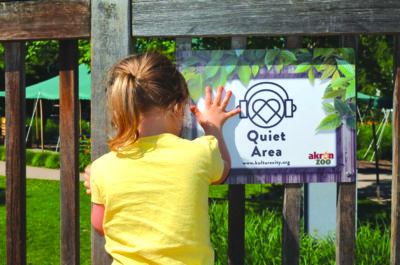 Building Sensory-Inclusive Areas for All Ages

Amy and Jeff are founders of the Ohio division of KultureCity, an organization that started in Birmingham, Alabama, and is now spreading across the United States. The Belles have an autistic son, and they realized the need he has had in public places to find a quiet space with resources to distract him from outside noises and influences.

“When people care who are not directly impacted . . . that’s when change happens,” Amy says.

Amy first spoke to KultureCity, the company out of Alabama, about creating a sensory-safe area in the Quicken Loans arena, a “quiet room” where people can go when things become too loud, a place for those of any age who need this retreat— from elderly to children, from those with PTSD to those with dementia.

Quicken Loans has trained its employees to deal with and set up a sensory-safe area for those in need with time-outs for them and sensory bags full of supplies to help with their needs.

The Akron Zoo quickly bought into the idea and created a sensory-inclusive destination.

Amy, a schoolteacher in the Copley/Fairlawn district, brought the concept back to her Akron home area. “We did an event at the Akron Zoo first, rented the zoo out, handed out ‘life boxes,’ kits that prevent wandering ,” she says. The kits, which are now given out at many destinations, include fidget toys, candy, markers and tablets.

The Akron Zoo is now the second in the country to offer sensory inclusive places for people of all ages in need, with headphones, blankets and “quiet” animal areas.

“We wanted to keep funds here locally. Wanted to directly impact our community,” she says.

The Belles have also successfully brought the concept to the Akron Childrens’ Museum and 18 libraries in Summit County. They are working with the Akron RubberDucks, the Rock and Roll Hall of Fame and FirstEnergy Stadium as potential future venues.

“The more we could get our son out, the more he could learn,” she says. “We need to get these individuals back into society,” she says.

65 Comments on “Amy and Jeff Belles”

how does viagra work best

how does viagra work best

buy viagra online without a prescription

where to buy viagra in mexico

viagra for men and women

price of cialis at walmart

to get viagra in toronto

Buy viagra in us